In Australia, its taken quite a while for IPv6 to catch on. Mostly because we have around 2 IP addresses per person here (in most other parts of the world people have to share IP addresses).

My ISP, Internode, was the first Australian ISP to deploy IPv6, and I made a point of using it since at least 2013.

Recently, I’ve noticed other ISPs are getting on board. When I arranged for Exetel NBN at church, it supported IPv6 by default. I checked my dad’s business has IPv6 available via Exetel as well. A number of other ISPs support IPv6 to some degree.

So, given that IPv6 is going mainstream down under, it’s time to do a basic guide.

Because they’re so much longer, they’re written differently. IPv4 addresses were written in dotted quad notation, which is four decimal numbers separated by periods. Eg: 192.168.1.2.

IPv6 addresses come in two parts, the first 8 bytes are the routing prefix and the last 8 bytes are the network identifier. IPv4 originally had an idea similar to this, but it got lost in history when we started running out of addresses.

The routing prefix is the bit your ISP gives you, while the network identifier is determined by your computer.

This is how IPv6 works. You will never be assigned a single address by your ISP, you always get a prefix or range of addresses. And your devices chose their own network identifier, usually based on their hardware ethernet address.

The smallest possible IPv6 network is a /64, you are not allowed to break up networks any smaller than that. So that means you have space for thousands of trillions of devices in your home network! (Or, you can fit the entire IPv4 Internet into your LAN a few million times over)! That means ISPs cannot assign you anything smaller than a /64, which is partly why you are always allocated a prefix.

Why do you want sub-networks? Perhaps you have a guest WiFi network, and you want to isolate it from your main network. Perhaps you are hosting your own web server (like me) or mail server, and you want to isolate them. Maybe you have VoIP phones that you want separate from your devices. In each of those cases, the isolated network will receive a /64 (because that’s the smallest you can allocate), so you need at least a /60 to make any of the above work. While hosting is pretty uncommon for home users, guest networks and VoIP support are built into most home routers, so this isn’t something for nerds, enthusiests or big business; it’s par for the IPv6 course.

You’ll Always Have More than One

So far, I’ve only talked about publicly routable IPv6 address. These all start with the number 2. But every network interface will also have a link-local IPv6 address, which starts with fe80. Indeed, even if you don’t have a public IPv6 address, you computer almost certainly has a link-local address.

Link-local is the IPv6 equivalent of 192.168.xxx.yyy or 10.xxx.yyy.zzz - it’s private address space that is only accessible on a local network. Except, link-local addresses are required to make IPv6 work, so you always have one (even if you have a public address as well).

If you’re reading closely, you’ll have picked out a privacy problem with IPv6. Your network identifier is based on your computer’s hardware, and will stay the same no matter what prefix you have, even for link-local addresses. Here’s an example from my hosting server Cadbane:

The network identifier is f24d:a2ff:fe7c:1614, and appears for both the public address (starting with 2001) and link-local address (starting with fe80). Even if Cadbane receives a different prefix, the network identifier remains f24d:a2ff:fe7c:1614. Indeed, that identifier is clearly based on the hardware ethernet address f0:4d:a2:7c:16:14 - there are minor differences, but they’re nearly identical.

Except, smart people realised this and made RFC4941, which allows computer to do two things:

First, you don’t have to use the hardware address of your network interface (MAC address) for your network identifer. As long as whatever you choose won’t change, that’s OK. So, you could use a cryptographic hash function to derive a network identifier from your MAC address, but keep your MAC secret. Or, you could simply pick a random 64 bit number, save it somewhere, and use that.

That helps, but not much. Because every connection you make will have still the same network identifier. So you’re also allowed to create a temporary address. This is a short lived IPv6 address, which is basically a random number. Every few hours, your computer generates a new random address for all outgoing connections, and deprecates any previous temporary addresses. Which eliminates the “tracking cookie” part of IPv6.

Windows does this by default, as does Android. I believe MacOS does as well. My Debian Linux servers do not; I’m guessing there is an option to opt-in somewhere.

Here’s an example from my laptop, you can see it had addresses 4 in total:

Because they’re longer, IPv6 addresses are harder to type. That’s not exactly earth shattering. But there are some complications which make them even harder than at first glance.

In the end, it’s best to assign names to your IPv6 addressable devices. Most operating systems will cope with local names (eg: typing cadbane into an address bar). Or, you should use DNS.

If you don’t believe how bad it can be, read on!

URLs let you enter a port. By default, that’s 80 for http, but it’s common to run web servers on other ports, eg: 81, 8080, and others. Software developers are always creating web servers on their computer, and each one ends up with a different port.

But IPv6 has co-opted the colon : for other purposes. So you have to write it with square brackets:

My laptop’s link-local address is fe80::1234:5678:abcd:dcba%8. The %8 for the eighth network interface in Windows. Linux based systems tend to use %eth0, based on their own naming scheme.

In a URL, that percent symbol has special meaning: it is an escape character. So, to refer to a link-local address, you need to use %25 instead of just % (escaping the escape character):

It’s easier to revert to IPv4, or assign your devices meaningful names.

In IPv4, you generally use DHCP to centralise configuration and management of addresses. Not with IPv6.

IPv6 can work out a global address without any DHCP server.

So how do you get the prefix? IPv6 has a protocol called SLAAC, which is used to auto configure. Part of which is a thing called Neighbour Discovery. This takes on the role of ARP, mapping IP addresses to ethernet addresses, and detecting duplicate addresses. It also allows devices to query the network for routers, which can respond with a network prefix. This is called Router Advertisements or RA.

So, your router can query your ISP for an IPv6 prefix (via SLAAC, DHCPv6 or PPPoE), and then pass that information onto your devices without any additional configuration!

How Many Addresses, Really?

An IPv6 address has 128 bits, which means 2^128 addresses (or some huge number with 38 digits). But, as we’ve seen, not all those addresses will be in use. Indeed, IPv6 leaves most of it’s address space empty, by design.

So how many addresses are really available? Are we going to run out like with IPv4?

First off, IANA, the global body which issues IP addresses, has only allocated one eighth of the global IPv6 address space, or 2000::/3. Which is why every public IPv6 address you see starts with 2. You can read the actual address allocations if you’re interested.

But it’s not that simple. Because most IPv6 customers will get more than a /64. Depending on residential, small business or multi-national corporation, your ISP may allocate a /60, /56, or /48. ISPs themselves are being allocated /32 blocks (and, I suspect, the really big tech corps like Google, Facebook, Amazon, Microsoft, etc).

I live in Australia, so I looked up APNIC’s allocations. They publish their IPv6 assignments on their own website, or you can see them on the IANA publication. They have several ranges, but the biggest is 2400:0000::/12. So lets crunch some numbers based on that.

Their /12 give them 52 bits of address space. They can allocate 2^20 /32s to ISPs. That’s a little over one million allocations. Given that most ISPs only have one or two allocations so far, that can support hundreds of thousands of ISPs across the Pacific, China, India and South East Asia. This covers several of the world’s most populus nations and over two billion people! But it’s more than enough.

How many customers can each ISP’s /32 cover (assuming they only have one)? It depends on the allocation size, so here’s some numbers:

Given that ISP’s need to allocate for households and businesses, not individuals, a single /32 is enough for ISPs to cover a country - certainly one with the population of Australia. Even countries like China and India, a single ISP could one or two /32s could allocate a /60 to every household with room to spare.

And, if all this turns pair shaped, IANA can change how things work for 4000::/3 (which is the same size as above).

So, no. We aren’t about to run out of IPv6 addresses any time soon.

That’s lots of information and plenty of “show working” as well. So here’s a summary about IPv6 addresses:

Mikrotik’s support for IPv6 is usable, but not brilliant. This is a bigger problem if you’re deploying Mikrotik in the data center, but for home use its just fine (and better than the normal garbage found in residential routers).

With that out of the way, let’s look at what you need to get going.

First off, visit System -> Packages and enable IPv6. It should be installed, but disabled, by default. You’ll need to reboot your router.

After then, there is an IPv6 section available in Winbox, Webfig and Console.

Generally, you’ll define one /64 pool for each VLAN or network you are running. I’ve got ones for my main LAN, hosting DMZ, phones and a guest network.

You should statically define your pools in advance. That is, create each pool before you get an assignment from DHCPv6 / SLAAC / PPPoE. Because, when you do get your ISP prefix, it will occupy a /56, and Mikrotik won’t let you create overlapping pools. (I end up deleting the dynamic pool whenever I need to make changes to other pools).

This assumes your ISP assigns a static IPv6 prefix (all Australian ISPs I’ve worked with are doing this - you may need to visit a management portal to find your prefix).

After you’ve made a pool, you can create an IPv6 -> Address and assign it to a network interface.

The only option you need to worry about is ticking Advertise. That will enable router advertisements and let your devices configure themselves via SLAAC.

All network interfaces will be automatically assigned a link-local address. 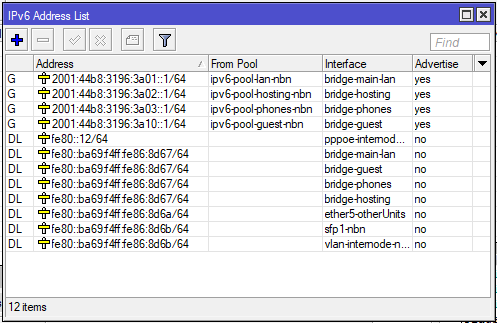 After this, your devices should have a public IPv6 address based on the prefix assigned to your network!

However, its unlikely they’ll be able to access the IPv6 Internet just yet. You’ll need to get an assignment from your ISP. With the Australian ISP’s I’ve worked with, that involves IPv6 -> DHCP Client. (You might be able to configure a default route to accomplish the same thing, but it depends on your ISP). 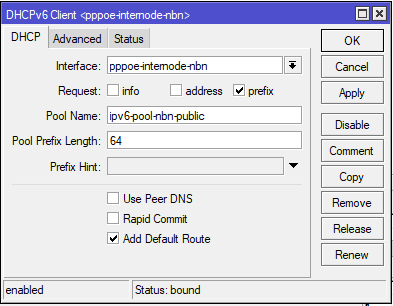 Finally, IPv6 has its own firewall. Generally, I leave this pretty open, and rely on devices’ own IPv6 firewall.

There are some important things you need to allow, or your IPv6 connectivity will be broken: ICMPv6, UDP traceroute and DHCPv6 prefix delegation. Otherwise, this is the same as IPv4 firewall, just simpler.

IPv6 is new and different. But not that different.

In many ways, it’s simpler to configure and make sense of than IPv4. The smart people in charge of the Internet have learned from IPv4 and made IPv6 better!

Hopefully, after reading this post, you’ve got enough understanding of IPv6 to be comfortable using it in your home or small business.