Time is very important for computers to do the right thing.

If your clock is wrong by a minute authenticator apps won’t work. Wrong by an hour and Windows Networking has problems. Wrong by days and you risk SSL certificates expiring earlier (or later) than they should. VPNs may stop working. Datestamps on logs will be misleading. Generally, wrong time is a Bad Thing™.

A particular Mikrotik router, which I administer, has a scheduled task to turn the guest WiFi off overnight and back on again in the morning. I was told it wasn’t working the other day, and found that the router’s clock was wrong by about 10 hours after a power outage.

Configure a Mikrotik router to use the pool.ntp.org public NTP server pool in its NTP client. So the clock will be set accurately.

Update June 2018 - An Even Easier Alternative

Apparently, DNS based lookups are already available in Mikrotik routers. But only in the SNTP Client not the NTP Client (note the S at the start). And if you have manually installed the separate ntp package, the SNTP Client is hidden.

If you can’t find it, check in System -> Packages for the ntp package, and remove it (unless you want your router to be an NTP server - you probably don’t). You’ll need to reboot your router for this to take effect.

In the SNTP Client, set your primary and secondary NTP servers to 0.0.0.0, and Server DNS Names to your desired NTP server (eg: pool.ntp.org). And you’re done! It may take a 10-60 seconds while it updates your clock. 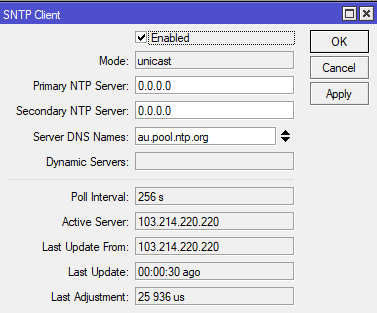 Mikrotik’s dynamic DNS / cloud service allows you to update the time on your router. This is much easier to configure than NTP and scripted tasks.

However, I’ve found it doesn’t always work (for reasons I never understood). And, you may be one of those people who don’t want to use “cloud” things that aren’t in their control. If that’s the case, read on.

I first tried to copy and paste pool.ntp.org into the System -> NTP Client settings. Winbox helpfully resolved the DNS name into an IP address. 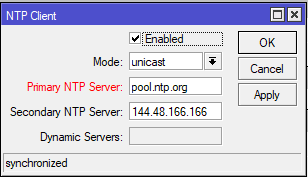 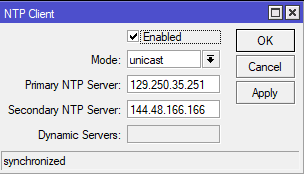 Unfortunately, the whole idea of pool.ntp.org is there are heaps of servers sitting behind that name. When you lookup pool.ntp.org, it returns different addresses each time. That distributes the NTP load around many servers. And servers may come and go over time (or IP addresses change). (My DNS provider even has a special POOL DNS record which does exactly this).

Resolving the name once and saving the IP address doesn’t really fit the intent of pool.ntp.org. Being a pragmatist, when I configured this router, I just ran with the set it once and hope it keeps working idea.

Last weekend was when it stopped working.

If a simple copy-paste wasn’t going to work, a script which updates the IP addresses on a regular basis will.

NTP isn’t installed on Mikrotik routers by default. Head over to the download page and grab the extra packages for your RouterOS build. Upload the NTP package to your router and reboot to install.

Tick the Enabled box, make the Mode unicast and stick some names or IP addresses into the server IP address slots. If all is working correctly, the status bar should say updating and eventually synchronized. And your router’s clock should be correct.

I advertise the NTP server on my router via DHCP (although I’m not sure many devices actually use it). If you want to run an NTP server for your network make sure you allow UDP packets on port 123 on your router. If you only want your router’s clock set right and don’t care for internal devices using NTP, disable the NTP Server.

A script will nicely resolve DNS names and then set the IP addresses in the NTP Client config. Using C# and SQL in my day job, the Mikrotik scripting language feels very basic (heck, even VBA feels nicer), but its more than what we need. And there are a variety of examples available to help you out.

The script defines the NTP server we will use (because I’m in Australia, I’m using au.pool.ntp.org, see how to use pool.ntp.org for more info). It then resolves the server name twice, which sets $primary and $secondary to ip addresses. And finally sets the NTP Client primary and secondary addresses. 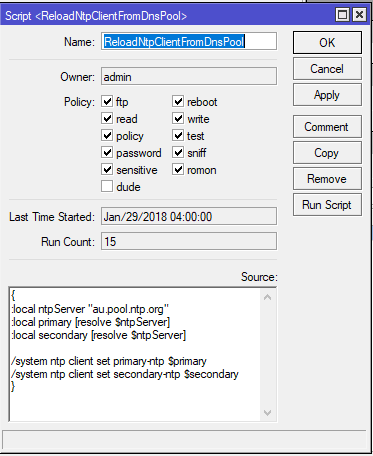 At this point it is wise to run the script to make sure it works OK. Getting errors or debugging information from your script is rather painful. But if it works OK, you should see the IP addresses change in NTP Client, and it re-synchronising.

3. Create a Scheduled Task to Run Your Script

Create a new schedule and assign the On Event to be the name of your script.

The Mikrotik scheduler is very basic compared to Cron or Task Scheduler. I’ve set my interval to 1 day, which changes to different servers reasonably often. 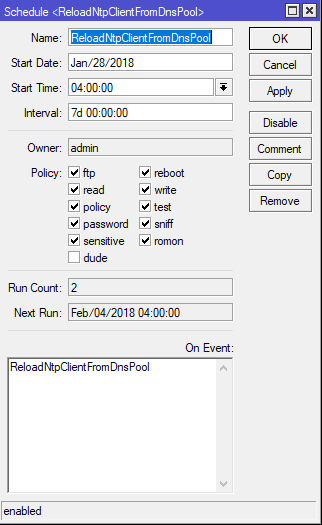 And that’s it! The schedule will invoke the script each day and update your NTP Client server IP addresses.

Mikrotik doesn’t support NTP servers via DNS names, which makes ntp.pool.org difficult to use. Scripting allows you to fix gaps in the standard feature line up of a product, and it works well for Mikrotik RouterOS.

Best of all, the clock on my routers is now correct!