Use an old Android device for 4G / LTE Internet on a Mikrotik router.

Each year, we go on a family holiday. The place we stay has no Internet (shocking, I know).

Over the last few years, this hasn’t been a big problem - just use our mobile devices, or just stay off the Internet for a week!

This year, the number of games which require some level of Internet connectivity has exceeded a critical point (basically all my son’s Lego games need to connect to a server to work - silly DRM). And, my son’s computer is a desktop with no WiFi device, so tethering is painful.

I decided I’d connect my old Galaxy Nexus Android phone to an old RB751U Mikrotik router, which was spare at work. This should give wired ethernet connectivity and Internet via 4G / LTE.

This article is based on this post by Tito Muntasa.

Configure a Mikrotik router to use 4G / LTE to access the Internet.

I’m not going to show any other configuration you may need for a Mikrotik device as a home router, but you’d need to do that as well.

I’m also assuming that the LTE will be the primary and sole Internet connection (no fail over, no duel connections).

0. Ensure your Android device can connect to the Internet

It’s no good if your Android can’t connect to the Internet.

I’m using a pre-paid mobile broadband service from Vodafone Australia. Mostly because it was half price when I bought it.

I needed to go through the process of activating the service, and reboot my phone with the new SIM card.

If you’re using your main phone or tablet, this should already be working.

(Oh, and it’s worth disabling WiFi on your phone as well, as USB tethering will prefer WiFi over mobile broadband. Which causes confusion when testing).

1. Plug your phone into the router’s USB port

The RB751U has a full sized USB port, so pretty much any phone USB cable will work. My main RB2011 device has a micro USB port, so I need an adapter cable. 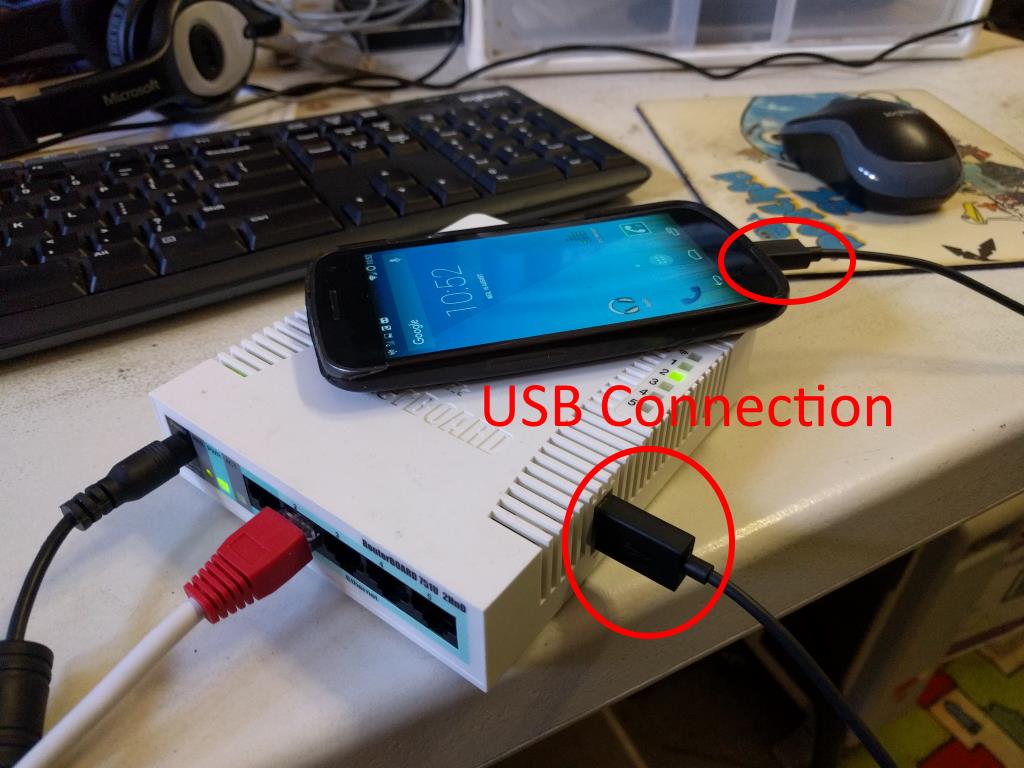 Before the Mikrotik router will recognise your phone / tablet, you need to enable USB tethering.

My old Galaxy Nexus is using a Cyanogen Mod 4.4.4 Android, which has USB tethering under Settings -> More -> Tethering & portable hotspot -> USB tethering. Yours may be in a different location. 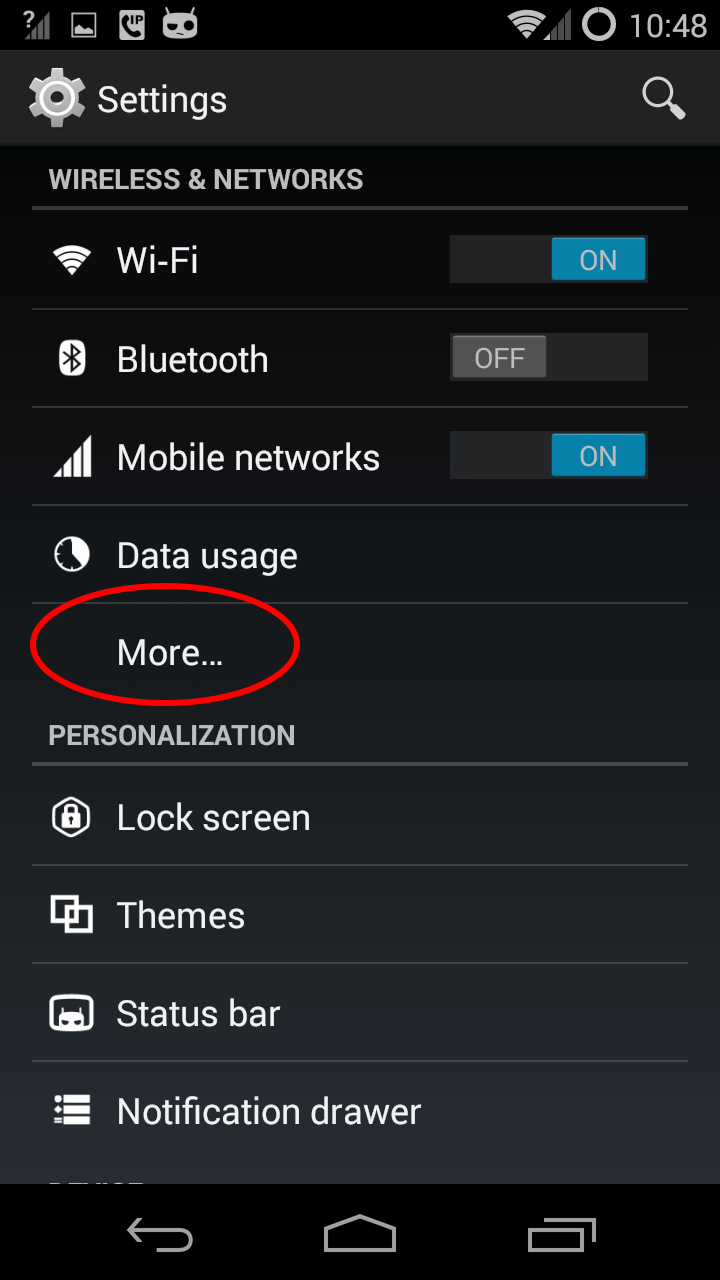 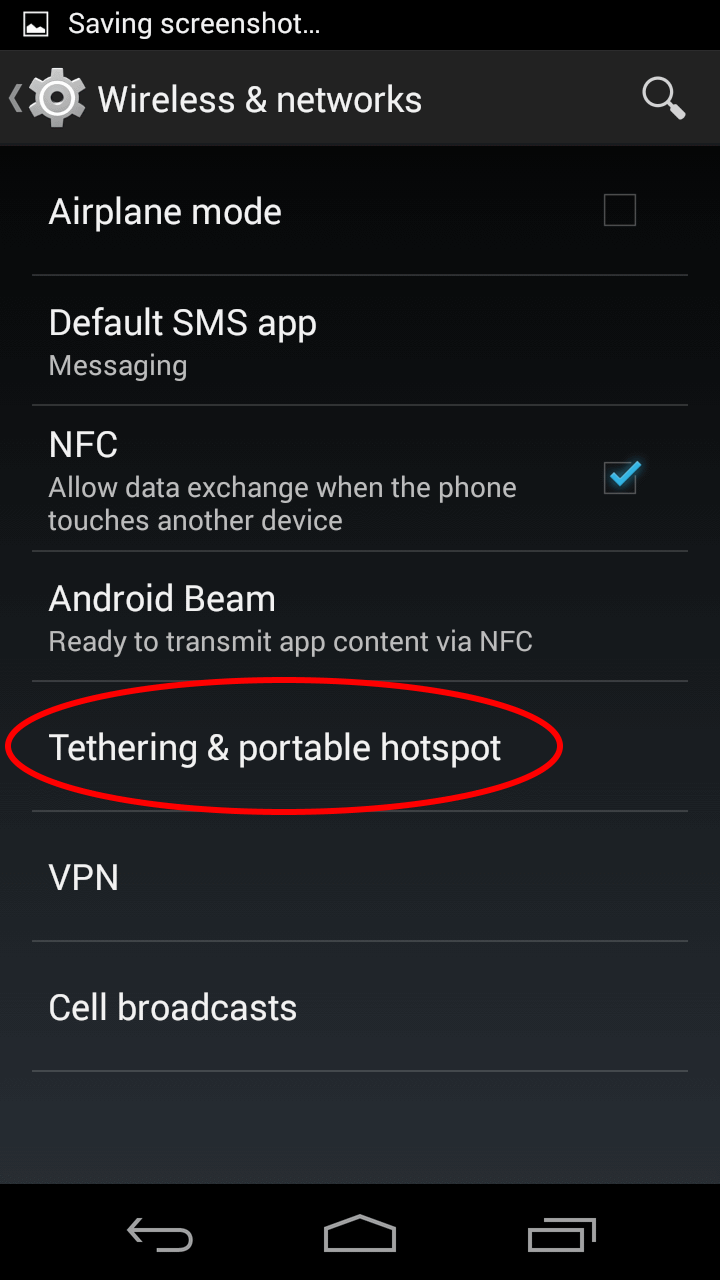 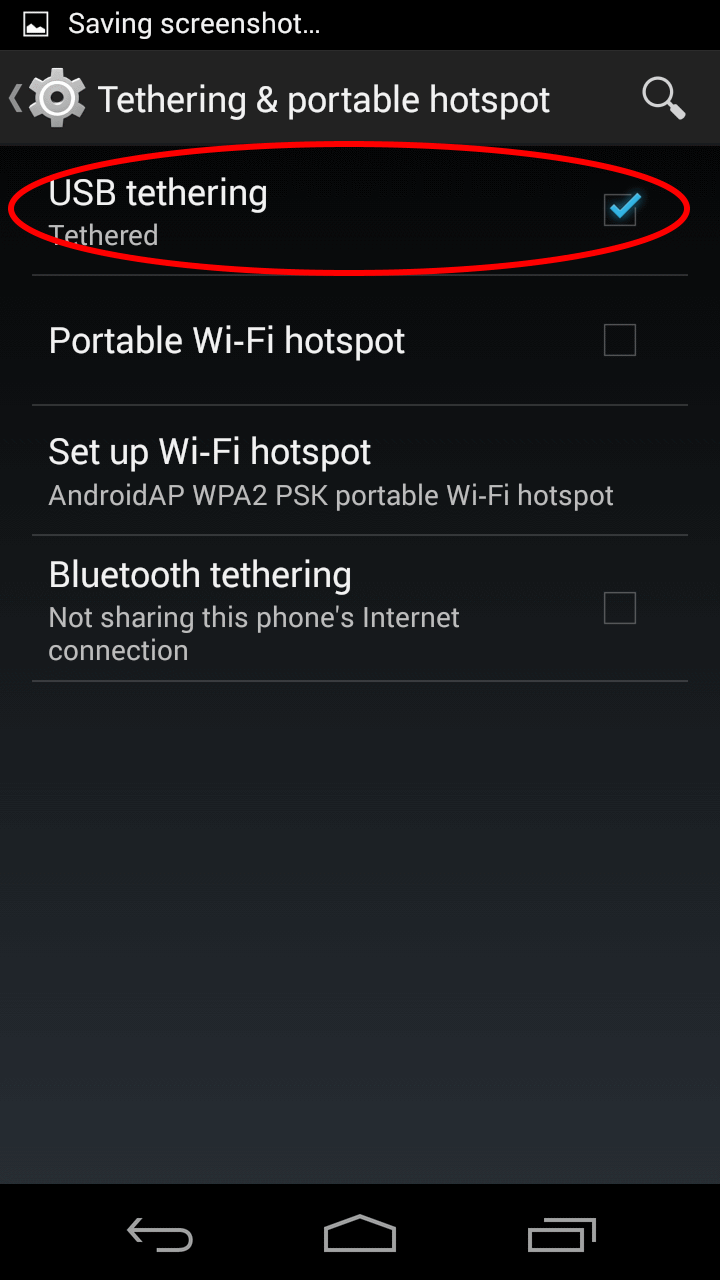 This is fine for my scenario (a week long holiday), but would pose problems for a longer term connection.

On your Mikrotik, you should see a new interface lte1 and a new USB device.

A list of connected USB devices can be found in System -> Resources -> USB. 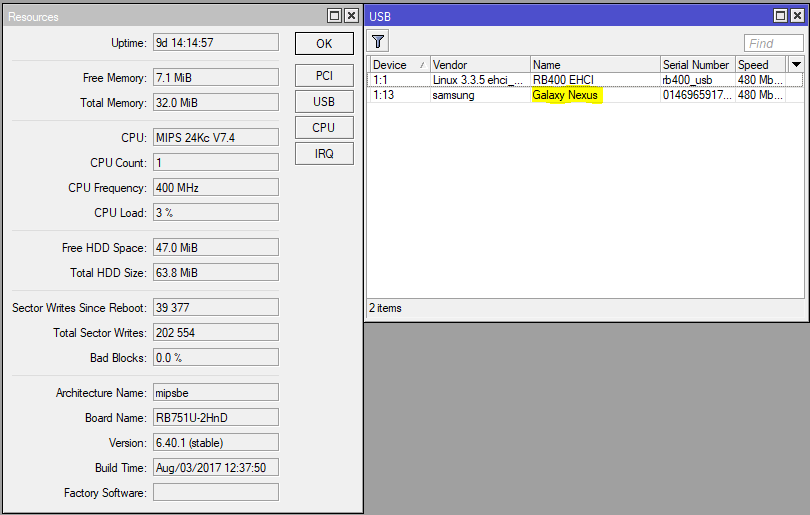 Android USB tethering works by looking like a USB network device, which your router / computer connects to and gets access to the Internet via DHCP.

As with most things in Mikrotik, you need to explicitly add a DHCP client for your new 3G / LTE interface.

You should enable a default route and Use Peer DNS. Other settings aren’t particularly important. 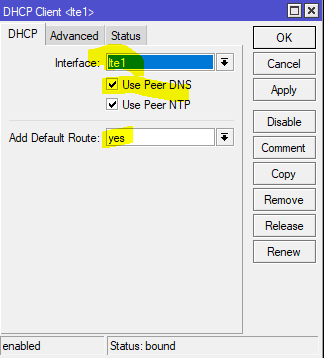 This isn’t a problem for my scenario (downloading stuff, consuming content), but will pose problems if you’re trying to host a web server.

If all has gone well, you should see a new interface added which corresponds to the IP address in your DHCP client / LTE interface.

(Note: I’ve manually disabled a default route to my normal ADSL connection in this picture).

The default firewall rules assume the Internet is connected to the first ethernet port (ether1). You’ll need to change those rules to use lte1 instead.

I also add a few passthrough firewall rules to track bandwidth usage (in Australia, mobile Internet is an order of magnitude more expensive than fixed line connections, per GB).

8. Test on the router

You can ping 8.8.8.8 from Tools -> Ping, and you should see the passthrough firewall rules tick up.

9. Connect devices and use the Internet!

At this point, all looks good, so connect a device and use the Internet!

First thing I do is a speed test. Mostly because its depressing how slow my ADSL is compared to LTE.

Although in this case, they’re both pretty ordinary. I guess I get what I pay for (cheapest mobile broadband and ~5 year old mobile device)!

Setting up a Mikrotik router to use an Android device is pretty straight forward. Nothing particularly special is needed for supporting Android phones.

The double NAT and manual enabling of USB tethering are handicaps, not severe enough for my use. If you want a more permanent LTE connection, check the Mikrotik list of supported hardware.