What to do when the power is off all day.

Last week, this blog and MakeMeAPassword.org were temporarily migrated to Azure due to a long term power outage at my house.

Hopefully, no one noticed (even if my day was highly disrupted). 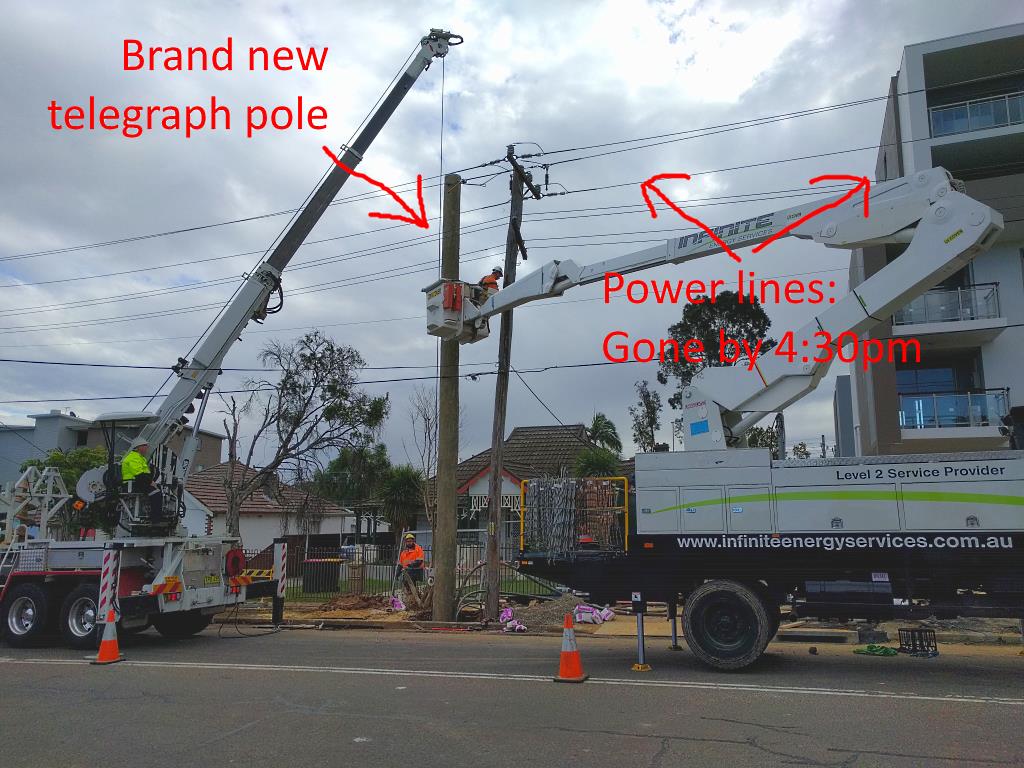 This article is how I prepared, migrated to Azure and then migrated back.

Self-hosting is not something I’d recommend for anyone else, but it works really well for me.

Professionally, I build and maintain websites like MakeMeAPassword.org which are hosted on IIS. I support sites hosted on Linux. And I am often tasked with troubleshooting or migrating websites which involves making DNS or webserver changes. So I have a considerable working knowledge of what’s involved in hosting.

I have bought appropriate hardware for hosting (reliable server, router and a UPS). Which lets me run the sites without great drama. The UPS will let me survive a few minutes of power outage, but not much longer than that - it’s mostly there to make sure the server will shut down cleanly.

The best part: self-hosting is extremely cheap. As in, I pay a bit extra for a static IPv4 address (which I need for work anyway) and a bit more for electricity. And even the cheapest hosting can’t touch that.

(The main difference between my self-hosted setup and real hosting is my ADSL connection is much slower than a real hosting company’s network link).

But, when I received a letter saying there would be a power outage for around 7 hours, I knew I’d either have to take considerable down-time, or migrate the sites temporarily. 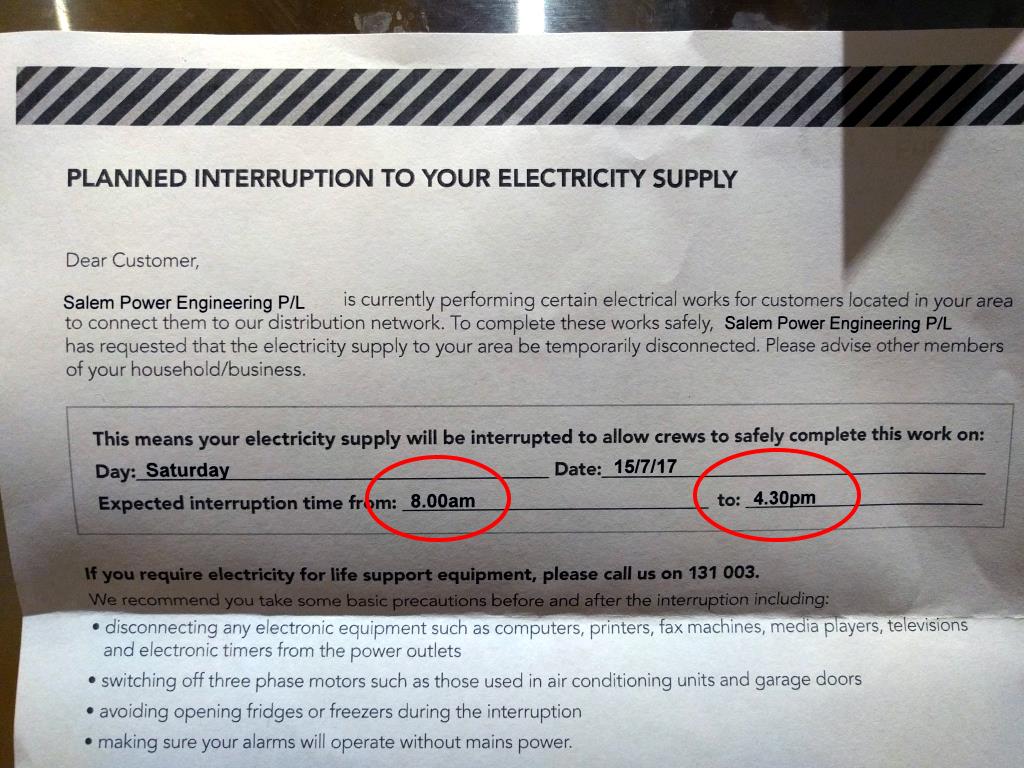 I chose to migrate to Azure for around 24 hours.

Azure lets you rent virtual machines, or host your sites. The former is basically a computer you rent - called infrustructure as a service in the trade. The later is more user friendly and provides a better feature set - usually called software as a service - but often needs your website to be aware of Azure in some way.

Given Make Me a Password uses some low level code to generate random numbers and might not work as an Azure hosted website, I chose a VM. It might have less features, but it’s closest to what I run on my home server.

I also did this several days in advance so I was confident it would work.

The great thing about Azure, AWS and other “cloud” providers is you only pay for servers when you’re using them. Turn them off and they cost nothing! (Well, almost nothing - the idle disks cost a few dollars each month). So planned to run the VM for a few hours while I get it working, and then for 24 hours of live hosting.

0. Create the VM in Azure

I chose a VM with Windows Server 2016 Datacenter. And configured an A2_V2 instance with standard storage. This gives me 4GB of ram, 2 CPU cores and HDDs. Which costs around $0.21 per hour when hosted in Azure’s Australia East data center. This is more than enough grunt to host the static content on this blog and MakeMeAPassword.org.

For serious Azure usage, you’d want to script all your actions so you can create and tear down virtual infrastructure automatically and in bulk. But I’m doing this as a one off, so I just used the Azure management portal, followed the wizards, accepted most defaults and turned off extras and “premium” features. 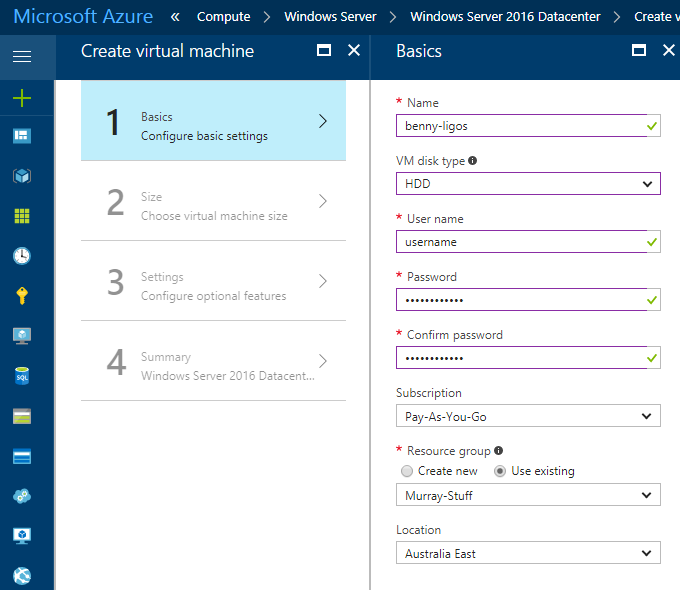 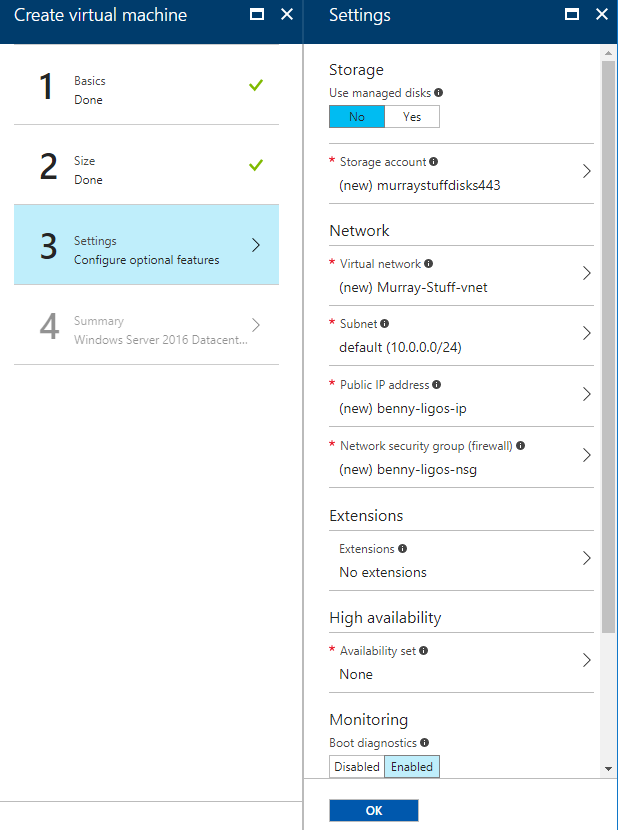 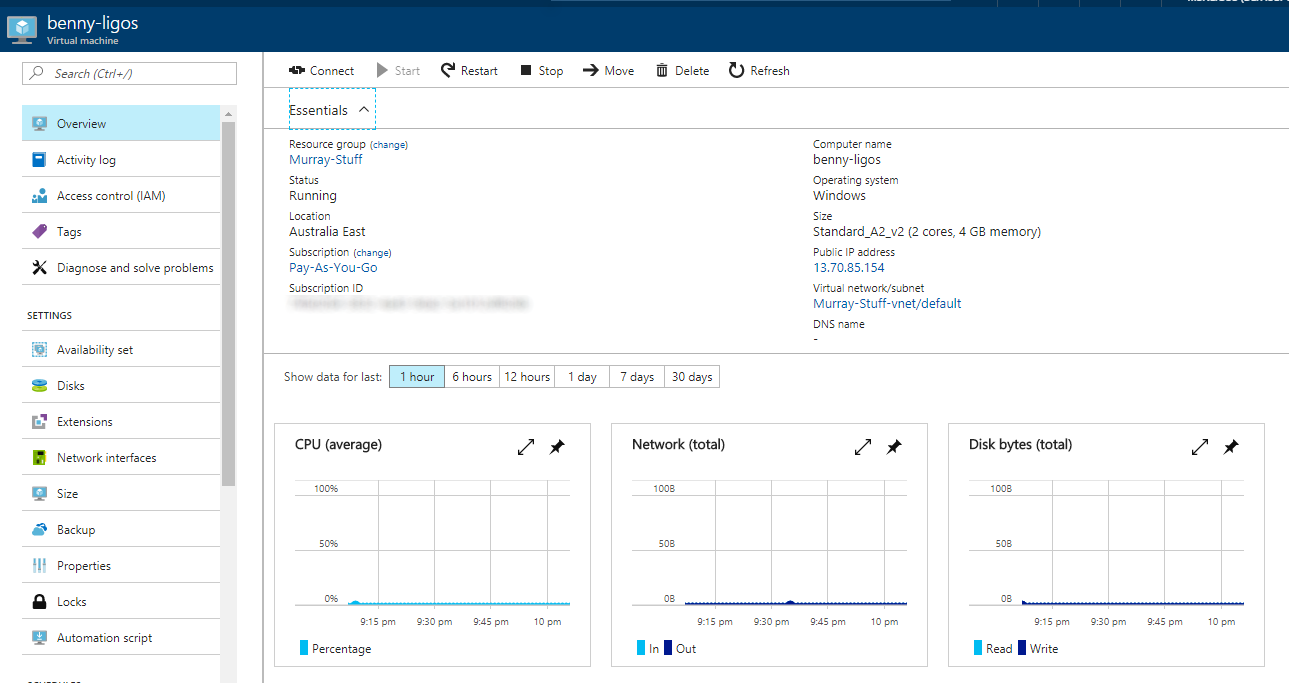 A VM is just like a normal computer, you just connect to it using an RDP Client. I logged on an installed some core apps: SysInternals, Chrome, Notepad++ and 7-zip.

Oh, and it’s always worth making sure any Windows Updates are installed. (Which always takes longer than I expect).

By default, an Azure Windows VM has very little installed. So I needed to configure the server for hosting websites. You can find the Add Windows Features section in Server Manager -> Local Server -> Manage -> Add Roles and Features. 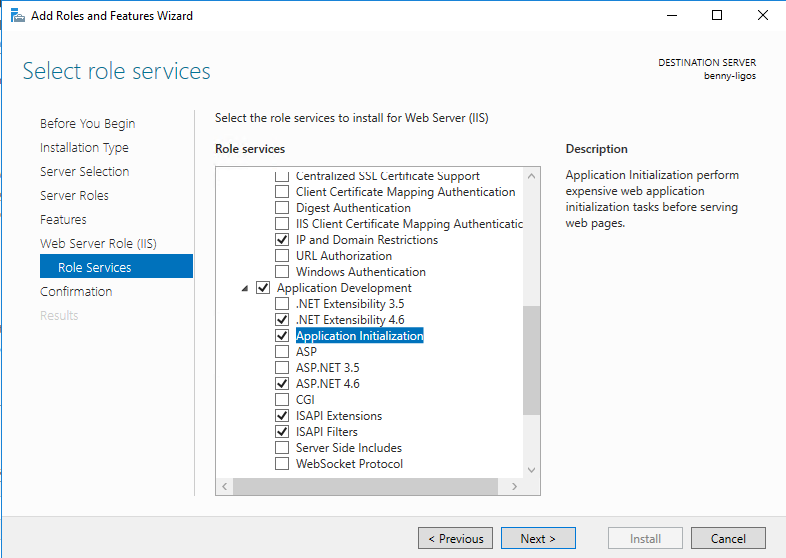 All my websites are encrypted using HTTPS and certificates issued by LetEncrypt.

This presents a small problem as LetsEncrypt requires you use their client app to acquire certs against publicly accessible websites. However, I can’t do this until I migrate the site and make it live. And that means there will be maybe 10 minutes when the sites won’t be accessible until I get new certs.

Fortunately, the raw certificates are saved by the LetsEncrypt app on my server. So I copied them up to my VM and pre-installed them. 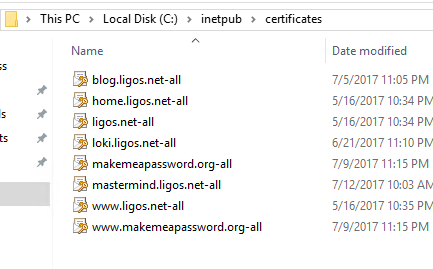 At this point, I have an environment ready to host some websites. So time to copy my sites up.

Because I have a slow ADSL connection, I compressed each site with 7-zip and uploaded the compressed files. Installing the sites is as easy as decompressing them into an appropriate folder. I usually make a c:\inetpub\sites folder and make a folder for each sub-domain in there.

I needed to tell IIS some basic details about my sites. Where their files are, what the domain name(s) are, what certificate to use, and how to run app pools.

I go over this in more details describing how to host Hexo on IIS.

For the most part, I just replicated the same configuration on my home server.

In theory, it should be working! To test that I could browse to the sites, I needed to add some entries to the hosts file) so the browser can connect to the right site by name.

And I can browse to the sites! 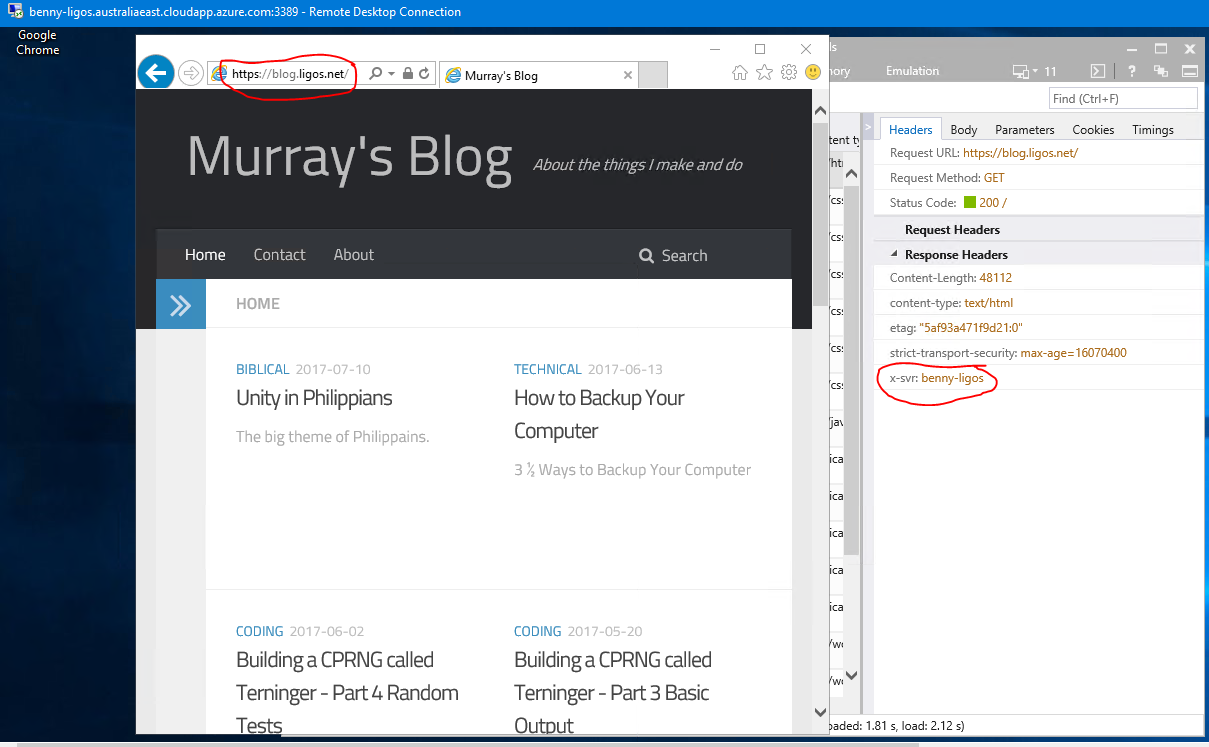 By default, an Azure VM is not publicly visible as a web server.

I made sure the Windows Firewall allowed HTTP and HTTPS traffic from anywhere on the Internet. And also used the Azure management console to allow ports 80 and 443 through to the VM.

The Azure Management Portal is a bit of a maze at times, but you’re looking for the Network Security group -> Inbound Security Rules: 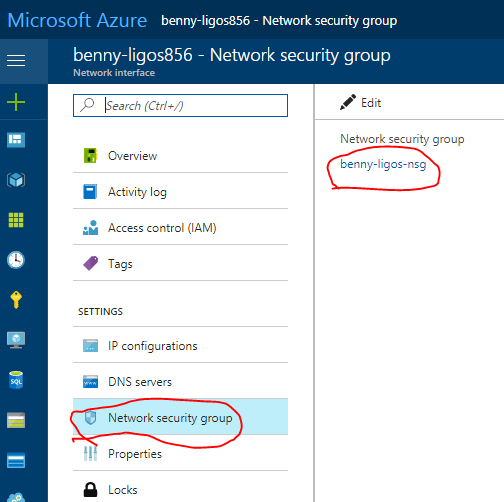 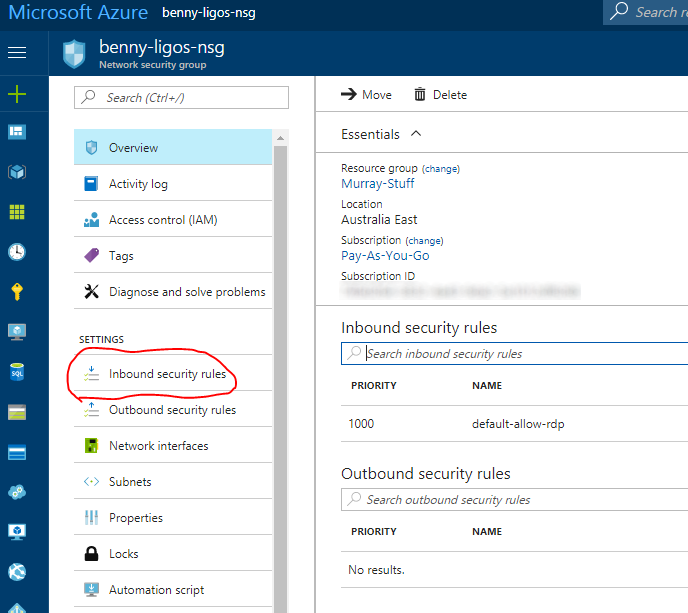 Almost there! There are two remote tests I do before going live:

The easy one is simply trying to connect to the VM’s public IP with a web browser. You should get the IIS welcome page, or your own site if that’s how you configured it.

The harder test needs the address in the browser to match the VM’s public IP. A quick change to the my hosts file) to manually override blog.ligos.net does the trick.

It’s very difficult to tell if this is actually talking to the VM because the sites on each server are identical, so I add a server header via the web.config file on all my sites so I can tell:

At this point, I have my site working on an Azure VM and accessible to the world! Only problem is the world is still looking at my home server. 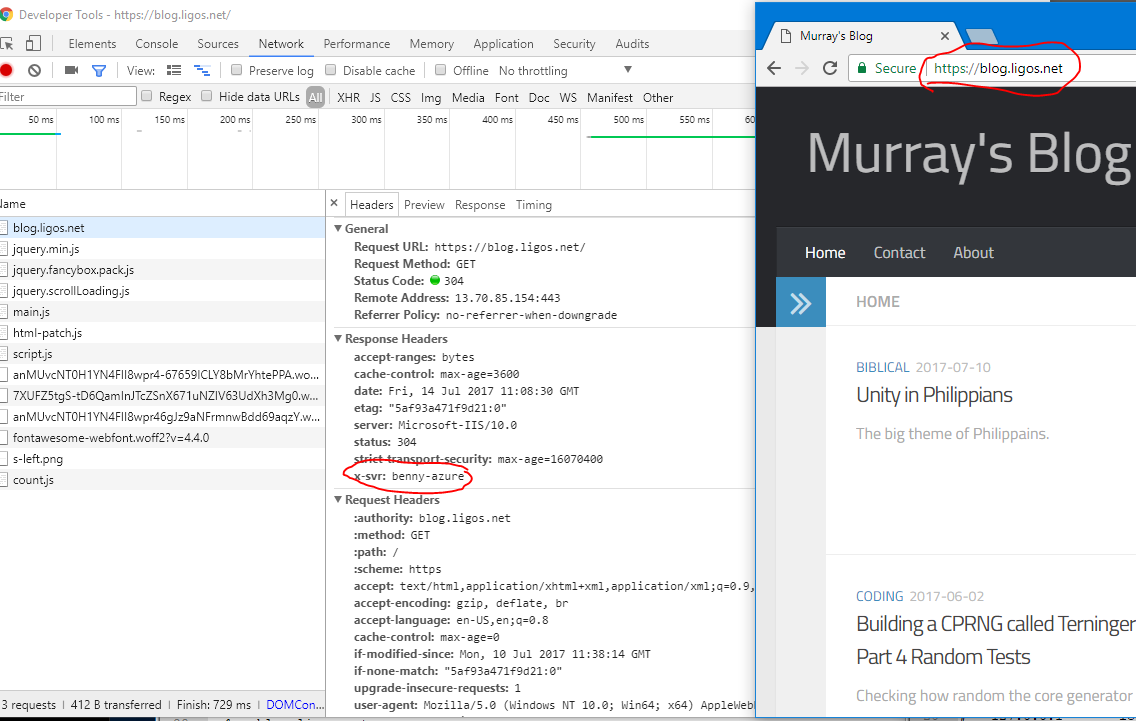 To tell the world about my new hosting arrangement, I needed to make some DNS changes. This changed blog.ligos.net to point to the new VM.

But I don’t want to do this yet, just lay the ground work for when I go live.

This means I only need to change web01.ligos.net to point to Azure for this to work.

(As an aside, this setup is very deliberate. It’s how I quickly switch from hosting on loki to my laptop while I do maintenance on loki).

So, in preparation, I set a DNS name for the public IP address of the VM: benny-ligos.australiaeast.cloudapp.azure.com. You can make this change in the VM Overview page -> Essentials -> Public IP Address.

After working in IT, software development, and information systems for most of my life, I’ve learned the best go live plan is the simplest go live plan. In this case, it’s change one DNS record.

The night before the planned power outage, I changed the web01.ligos.net CNAME to point to benny-ligos.australiaeast.cloudapp.azure.com. 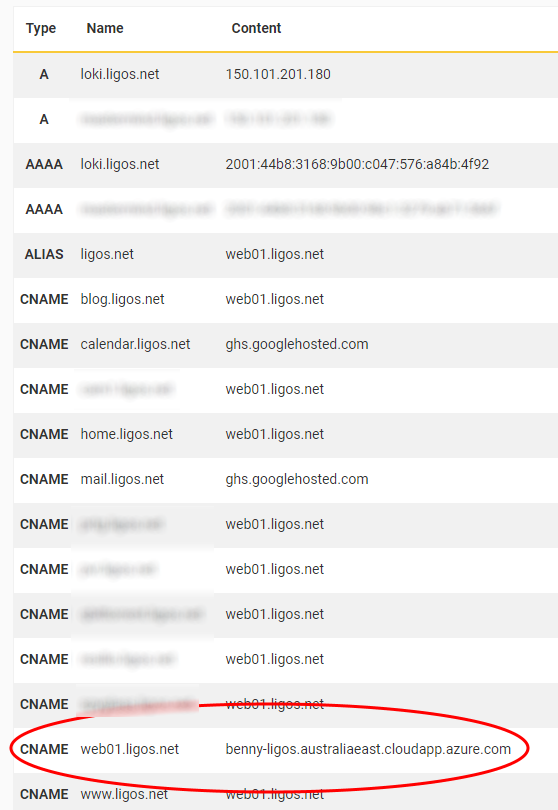 I waited half an hour and tested all is working OK (and also tested from my work computer to be sure).

And I went to bed (knowing I’m not going to be awake at 8am on a Saturday morning when the power goes out).

Fast forward to the end of Saturday when the power came back on at my house, it was time to put things back the way they were.

All this involved was reverting the DNS change in step 10: web01.ligos.net CNAME points back to loki.ligos.net. And waiting for an hour while the rest of the world notices the change. 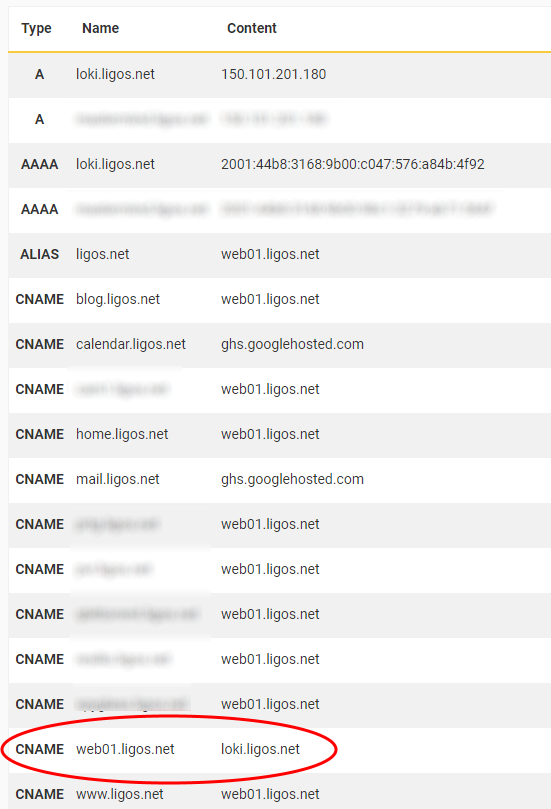 Then I turned the Azure VM off, and deleted it. 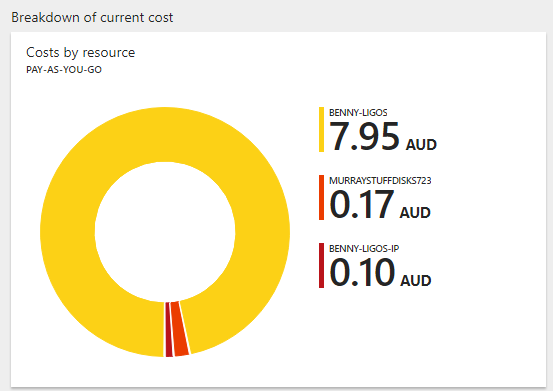 When you have time to plan for an outage, it’s not too hard (or expensive) to lift and shift your services to the cloud. And by running the two in parallel while DNS cuts over, you get zero downtime.